Racing Limos was founded by Bryan Pease in Naples, FL in 2002 as a specialty transportation company.  At its peak, Racing Limos boasted 53 active franchise locations, but the 2007-2009 downturn slid the franchise operations into difficult times.

James Albion (Dover, NH) got involved with the NH franchise as an ad agency, ZMJ Advertising (founded in 1992), and felt the company had potential more as a marketing & advertising company than a limousine service.  Albion took over the Racing Limos business under his NH corporation, Racing Limos America, Inc., in April 2010.

"With the economy likely to stay in the dumper for another 10 years, and gasoline showing signs that we could see $5 - $6 per gallon, I saw the potential of the business moving into marketing and away from a luxury service.  Regardless of economy, businesses advertise, and when the economy is very difficult, as it is now, businesses are looking for more creative, aggressive forms of advertising to keep moving forward.  We are that aggressive, creative business."

Franchises are priced as turnkey operations, making it easier for a franchise owner to be in business and moving forward from Day 1.  Contact James Albion (see "Contacts") for more information. 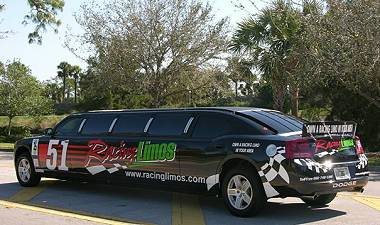